Taylor of LG Electronics Succeeds Cook of GE Appliances as Chair of AHAM Board of Directors;

New Officers and Members of Board Named 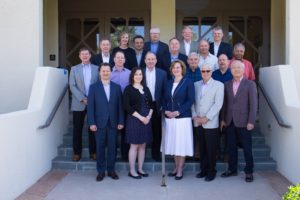 WASHINGTON, D.C. (April 27, 2018)- The Association of Home Appliance Manufacturers (AHAM) announced the election of John Taylor, of LG Electronics USA, as Chairman of its Board of Directors, as well as the appointment of other officers and directors.

“It has been a highlight of my life to serve as the Chair of AHAM during a time when we have advanced our record of achievement in advocacy and have mapped out a strategic plan for the next three years to move the industry forward.” Cook said. “AHAM fills a very critical role in bringing our industry together, and I’m confident our momentum will continue under the new board leadership.”

“AHAM is the home appliance industry’s forum for action, where manufacturers work together to develop the technical and policy foundation that benefits their customers,” Taylor said. “I look forward to working together to advance AHAM’s mission as the voice of the industry.”

Taylor has been active in the AHAM Major Appliance and Floor Care Divisions since 2004. He served as Chairman of the Major Appliance Division Government Relations Council from 2012-2018, and has been a member of the AHAM Board of Directors since 2009. He was named LG’s Senior Vice President in Charge of U.S. External Relations in 2017, after being Vice President of Government, Industry and Public Relations for LG Electronics USA since 2000.

A full roster of AHAM’s Board of Directors can be found online.